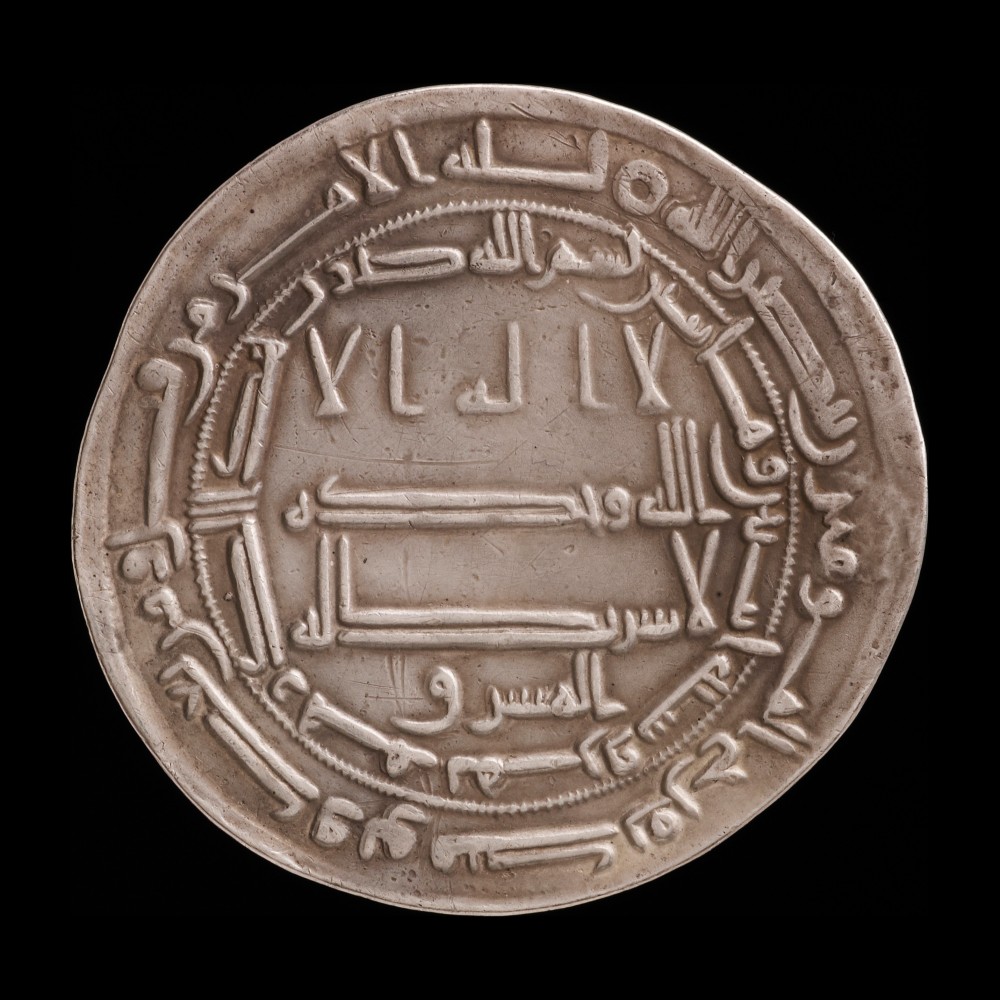 In field: la ilah illa/Allah wahda/la sharik lahu/al-mashrik “no deity other than the One God, He has no associate, the east”

Inner margin within serrate circle from 1:00: bism Allah duriba hadha’l-dirham bi-Marw sana ithnatayn wa mi’atayn “in the name of God this dirham was struck in Marw the year two and two hundred”

In margin within serrate circle anticlockwise from 2:00: Muhammad rasul Allah arsalahu bi’l- huda wa dinal-haqq li-yuzhirahu ‘ala al-din kullihi wa law kariha al-mushrikun “Muhammad is the messenger of God, who sent him with guidance and the religion of truth that he might make it supreme over all other religions even though the polytheists may detest it” – Surah IX (al-Tauba) v. 33

In 198 H, after al-Fadl bin Sahl, Dhu’l-Riyasatayn, had defeated and killed the Caliph al-Amin, the now undisputed ruler, al-Ma’mun, issued a new type of coinage initially in Marw and elsewhere in Iran which records his most audacious political action. In addition he showed that he would unite the two great schools of Islam, Sunni and Shi’a, by naming ‘Ali al-Rida, the Seventh Imam of the Shi’a, as his designated heir. This move, however, caused political uproar in Madinat al-Salam, as a result of which al-Ma’mun rethought his decision by arranging for the convenient murder of al-Rida. This coin was also distinctive because its weight was that of the original Sasanian drachm. The latter experiment was tried at Marw and the other Eastern mints, but was soon dropped because it would undoubtedly have caused confusion in trade, however it ultimately resulted in the abandonment of the fixed weight standards that had up to this time been adhered to by both the dinar and the dirham.