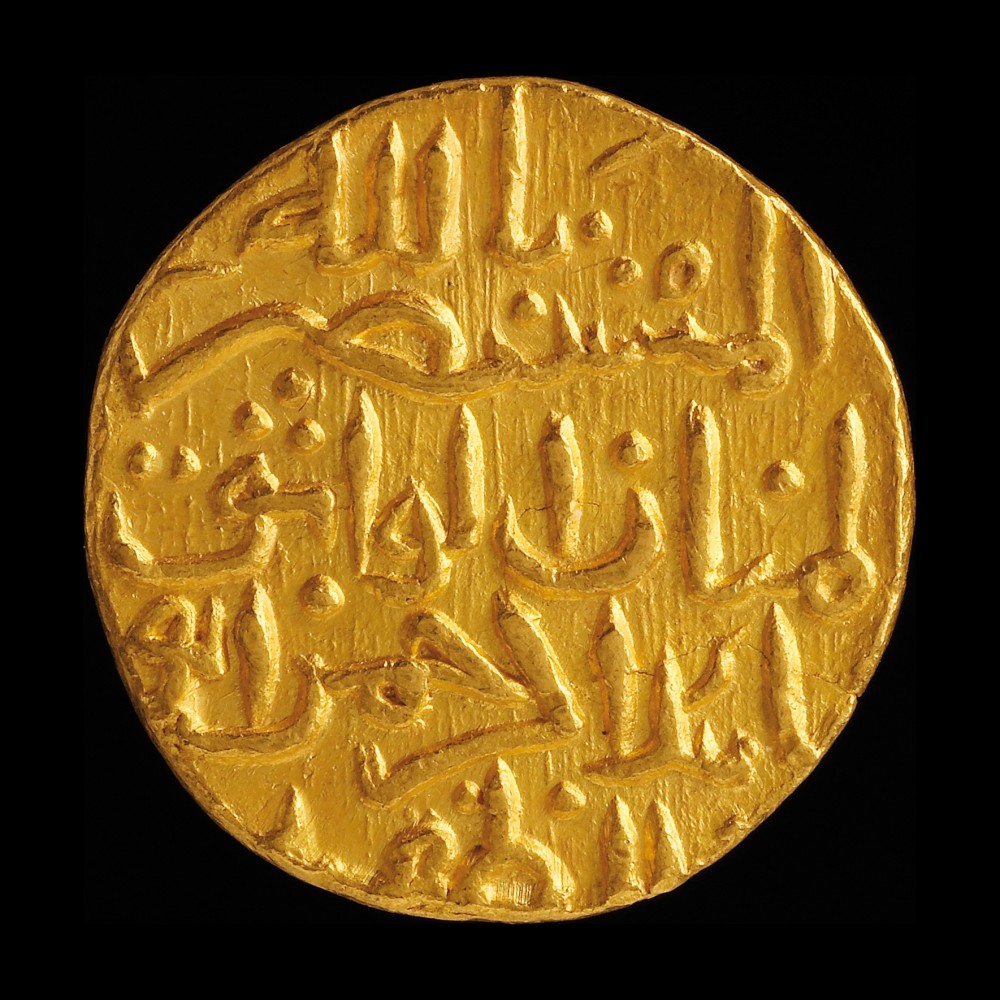 al-mustansir billah/al-mannan al-wathiq/bi-ta’yid al-rahman/abu’l-muzaffar “he who seeks assistance from God, the Beneficent, he who confides in the support of the Merciful One, father of victory”

After the Sultans of Dihli lost control over the Deccan, Amir Hasan Ganju, with the name Zafar Khan, declared himself sultan, taking the title ‘Ala al-din Hasan Bahman, and became the first ruler of the Bahmanid dynasty. He established his capital in Gulbarga, which he renamed Ahsanabad. Bahmanid rule lasted for nearly two hundred years and was confined to the Deccan tableland. Under the fifth ruler, Muhammad Shah II (780-799 H/1379-1397 CE), the Bahmanid court became a renowned centre of learning, where a distinctive Deccan style of Muslim architecture evolved. The government administration was reformed, the army reorganised and a programme of public works started which transformed the town of Gulbarga. Muhammad put a temporary halt to hostilities with his neighbours, and when the Deccan suffered an eight-year famine he provided his fellow Muslims with grain, built boarding schools for children, and gave allowances for the blind and readers of the Qur‘an. The nineteen-year reign of Muhammad was one of the most peaceful periods in Bahmanid history. He died in 799 H/1397 CE and a year of unrest followed during the ephemeral reigns of two of his sons. Order was restored by Firuz Khan, a cultivated and scholarly protegé of Muhammad II, who acceded to the throne in 800 H/1397 CE and ruled for twenty-five years. He was a statesman and military leader, who brought peace and prosperity to his kingdom. He also encouraged trade and commerce, enabling Arab merchants to import European goods through the ports of Goa and Dabhol. The currency system of the Bahmanids was the usual one found in Muslim India with a rare gold coinage, such as this tanka of 808 H, an unrecorded date, a common one based on the silver tanka, weighing about 11.00 grams, and a copper coinage for everyday purchases.

92 Sultans of Bengal
Scroll to top