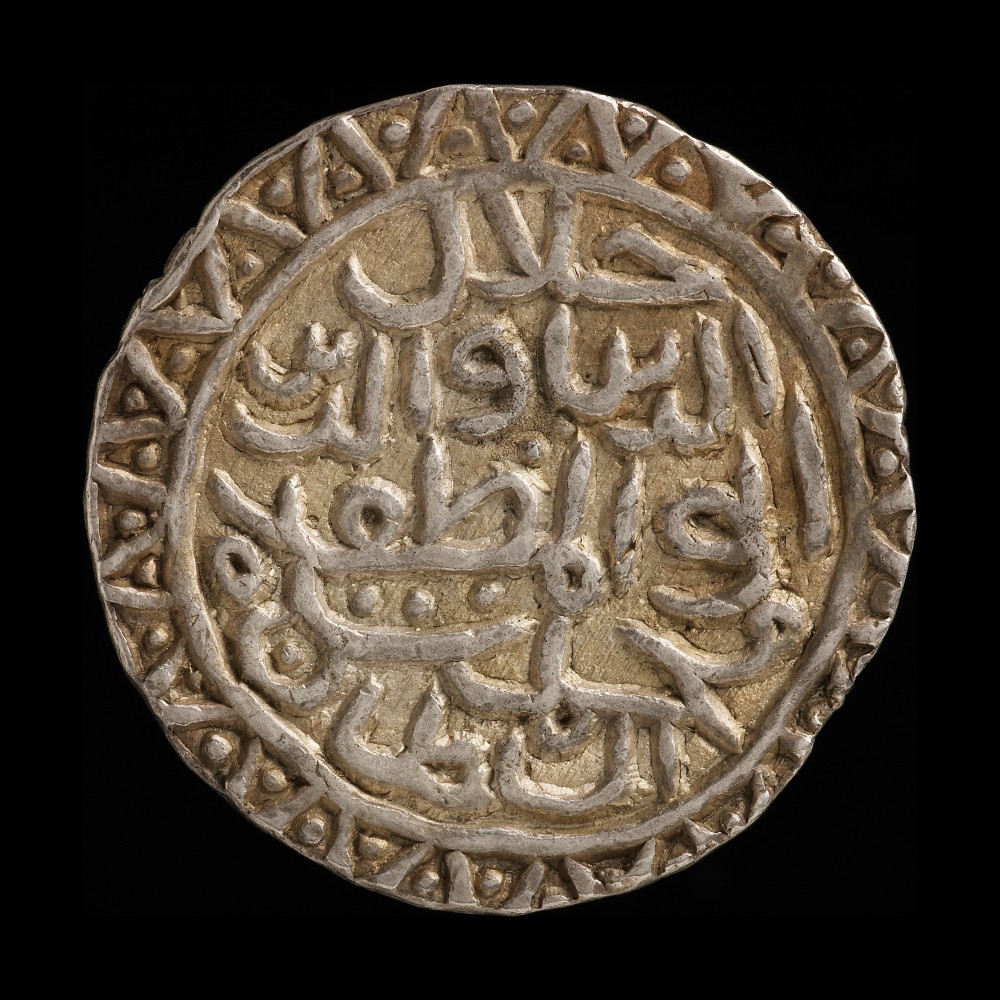 In field within single circle: Jalal/al-dunya wa’l-din/abu’l-muzaffar/Muhammad Shah/al-sultan “Glory of the world and the faith, father of victory, Muhammad Shah, the sultan”

Around: ornamental border of inverted v with pellets within and between each

It is said that after the death of Shihab al-din Bayazid Shah in 817 H/1414 CE Bengal was subjugated by the Hindu general Raja Ganesa, whose oppression of the Muslims led them to ask a “saint” named Qutb al-‘Alam to ask Ibrahim Shah of Jaunpur to march on Bengal. Alarmed by this, Ganesa asked al-‘Alam to intercede for him, which the latter agreed to do provided his son Jadu converted to Islam, which he did taking the name Jalal al-din Muhammad. His first reign was brief, for he was deposed by his father who claimed the throne for himself with the name Danujamarddana Deva, and imposed Hindu rule on Bengal. After two years he was succeeded by one Mahendra Deva, who may have been Jalal-al din briefly reconverted to Hinduism, or possibly a brother. However, in 821 H/1418 CE Jadu returned to the throne as a Muslim, again with the name Jalal al-din Muhammad Shah. He struck highly original gold and silver coins with beautiful <i>tughras</i> that inscribed his name and titles in sweeping upward strokes. In 824/1421 he introduced the first of his silver lion tankas, which are the most remarkable coins in the Bengal series. They were struck in three denominations including this extremely rare one tanka. The reverse shows a lively, open-jawed prowling lion, while the obverse is conventional bearing only Muhammad Shah’s name and title. These coins do not bear mint names, and this one is undated. It is not known why Muhammad Shah issued them, but they may have been struck as a gift for an ambassador from the ruler of China, with whom the Bengal Sultanate had good trading relations. However, the lion may simply have been a symbol of kingship and power. It also appeared on the coins of two later Sultans of Bengal, Nasir al-din Mahmud Shah (846-864/442-1459) and Jalal al-din Fath Shah (886-893/1481-1486), as well as on those of the rulers of Tripura in the east.